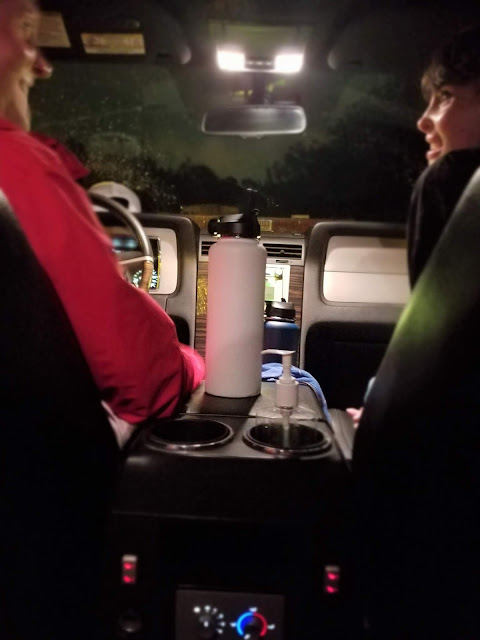 I was scrolling through my photos on my phone and
found this amazing one of me and Mr. Nielson.
I'm thinking Lottie took it.
Late last Tuesday after my plane landed in RDU I began
walking for what seemed like miles back to the baggage claim.
Mr. Nielson and I had been in contact, and he told me he was
going to be there to pick me up, but I assumed he'd be
in the car waiting for me at the curb.
As I got closer to the exit of the airport, I saw Christian waiting for me
along with several other eager people waiting for their sweet reunions.
There he was with bright eyes, and a giant smile.
I ran to him practically jumping into his arms
like I hadn't seen him in years.
As if seeing him wasn't enough, he had also planned for a little getaway
at a hotel downtown Chapel Hill AND my favorite salad from my favorite
restaurant sitting on my seat in the car.
I was beyond thrilled.
How convenient that the NC teachers strike happened to
land on the following day so this little overnighter was possible!
(And for the record, I think teachers DO deserve more money).
Mr. Nielson had a very early meeting the next day but hooked his motorcycle
onto our car so he could slip out quietly in the morning
while I leisurely slept-in.  And I did!
I felt spoiled.
* * * * * *
"Successful eternal marriages are built on the foundation
of faith in the Lord Jesus Christ and adherence to His teachings.
I have observed that couples who have made their marriages priceless
practice the patterns of faith: they attend sacrament and other meetings
every week, hold family home evening, pray and study the
scriptures together and as individuals, and pay an honest tithing.
Their mutual quest is to be obedient and good.
They do not consider the commandments to be a buffet from
which they can pick and choose only the most appealing offerings."