Angus gets a haircut and we almost get divorced

About a month ago Jane helped Mr. Nielson give Angus a haircut.
It was like the best haircut he's ever gotten.
We must have commented about it every day for weeks!
The time had come for Angus to have another haircut.
He was looking pretty shabby, plus he had just enjoyed
himself in the disgusting pond near The White House and smelled nasty. 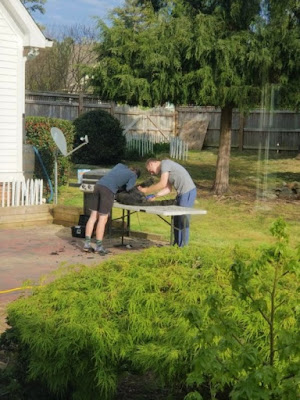 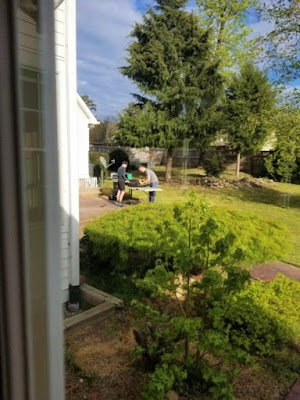 Christian set everything up just like last time.
I was ready with my boots on to assist.
But Angus just wouldn't hold still.  He was fidgety and barked a lot.
I was giving him treats to hold still so fast he wasn't even chewing them.
Christian probably said to me 4000 times, "Can you just hold him still?"
Then it turned really bad when the treat I was giving Angus
slipped out of my hand and onto the floor
and Angus jumped for it just as Christian was mid-cut with
his thumb still in the scissor hole.
We had to take a 10-minute breather while he recovered,
(by walked around the backyard doing some deep breathing exercises
and saying some words which I couldn't quite make out).
He came back and told me that Angus acted so much different when Jane
was helping him.  I took that as, "you're not very good at this."
So I called for Ollie to come outside.
I said, "hey Ollie, will you hold Angus while I do something."
Then I went inside and never went back out.
His haircut turned out pretty good.  Just not as good as it
did when Jane the 4H queen was helping.
But I can't be good at EVERYTHING, gosh!!