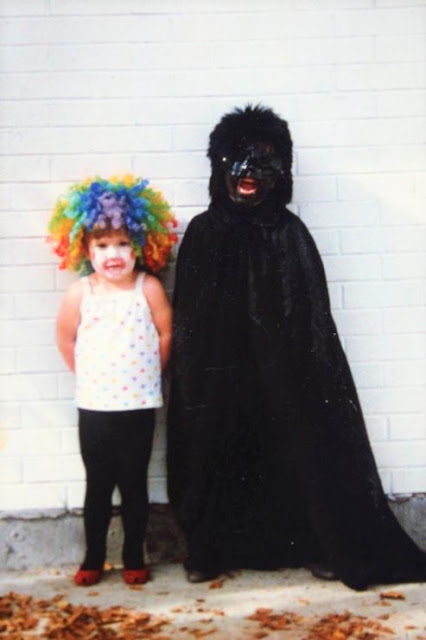 (Lucy and me, 1986)
Last night as I was putting Lottie to bed she asked me to
tell her a scary Halloween story,
and boy did I have a good one to tell!
But first I explained to her that it was super scary and that I was
worried she wouldn't be able to sleep after.
Her eyes opened wide and assured me she'd be OK.
So I began... Halloween, 1986, Kindergarten at Wasatch Elementary School.
One day I had brought home in my backpack a sign-up sheet that was
asking for parent volunteers to help with the class Halloween party.
I asked my Mom if she would come, and sadly she said that she
had already signed up to help in another Halloween party.
(There were FOUR of us siblings at Wasatch at that time). 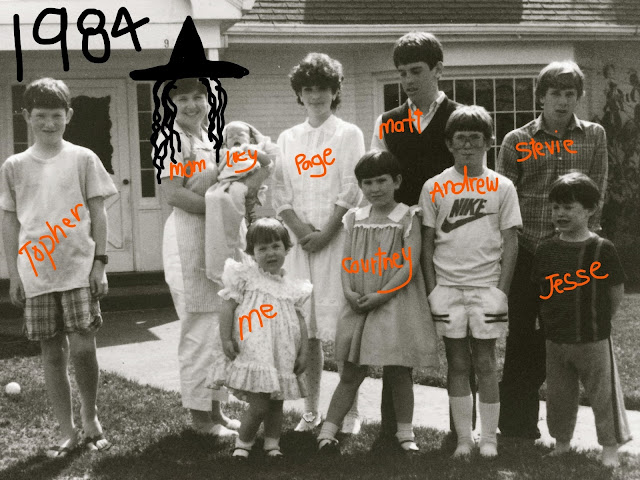 That Halloween I was dressed up as a bat/witch/Darth Vadar thing.
I am still not sure today what the heck I was, but there I was
enjoying the Halloween party in our classroom
when we were interrupted by a very scary high-pitched cackle.
I stopped dead in my tracks and that's when I saw her.
A spooky witch with a black cape, tall black boots,
a green face, and a long nose and chin.
Her teeth were black and she was probably the scariest thing I'd ever seen.
She wandered around the room scaring all the children-- to tears even!
She stayed only a few minutes, but before she left the room she
came up to me and called me by MY NAME!
Her green eyes pierced my soul.
Where was my MOM?!  I needed her!!
When 1987 rolled around again I asked my mom to help in the classroom
for our 1st grade Halloween party, and again she said no!
It was the same old story, that she had already signed up to help
in another classroom.
And just like last year as I was pinning the top on the pumpkin
minding my own business,
I heard a familiar sound echoing down the hallway.
Again, it was the witch!!!
And AGAIN she called me by my name!
HOW did she know my name???!!!
1988, 1989, and 1990 came and went and mom used the same old story,
of why she couldn't come into my classroom,
and every year the spooky witch made her terrifying appearance.
I remembered being just as scared in Kindergarten as I was in 4th grade.
So with just days away from Halloween in 5th grade,
I went to the attic to scrounge up something for my costume,
(I ended up being a masquerade lady wearing Page's Prom dress
which was an important detail in the story according to Lottie.)
As I was piecing together my costume I came across an
unsuspecting black bag in the Halloween box.
I opened it up and discovered something that made my blood boil and
the hair on my head shoot straight up. 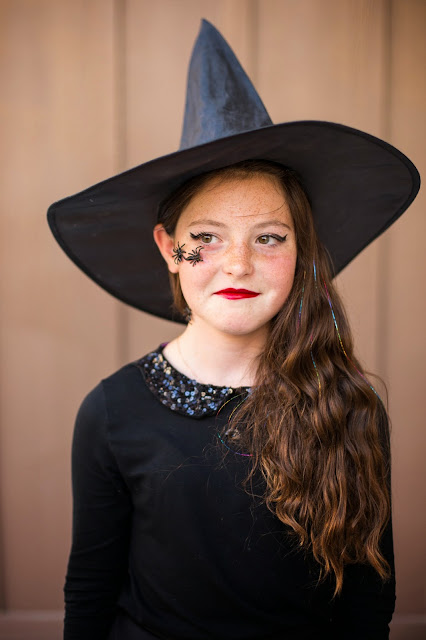 I noticed a pair of very familiar boots, a stringy black wig,
long black cape and a long nose and chin.
And then it hit me: MY MOM WAS THE SCHOOL WITCH!!!!
It was becoming clear to me why she could never come to help out
my classroom on Halloween all those years!
I was shocked but I also felt so relieved, like I had
just discovered the best-kept secret in the world.
I had unlocked Pandora's box and it was pure bliss!
That year my heart didn't pound when I heard the witch cackle
down the hall, because I knew it was just my mom.
HAPPY HALLOWEEN!!!!!!!! 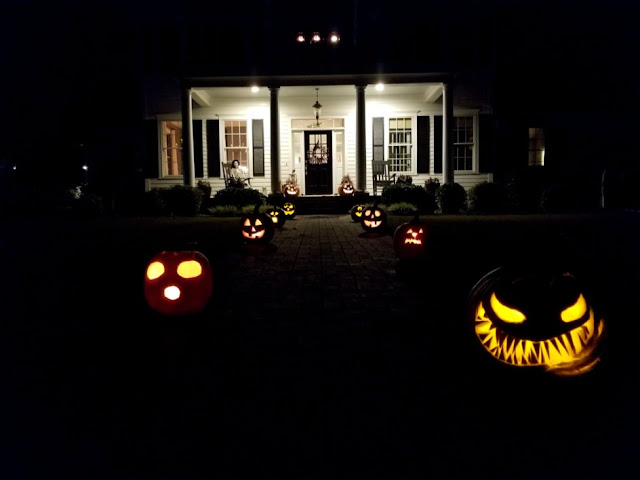 * * * *
Spiritual Enlightenment:
"There are eternal influence and power in motherhood."
(Even if your mom is a witch!) 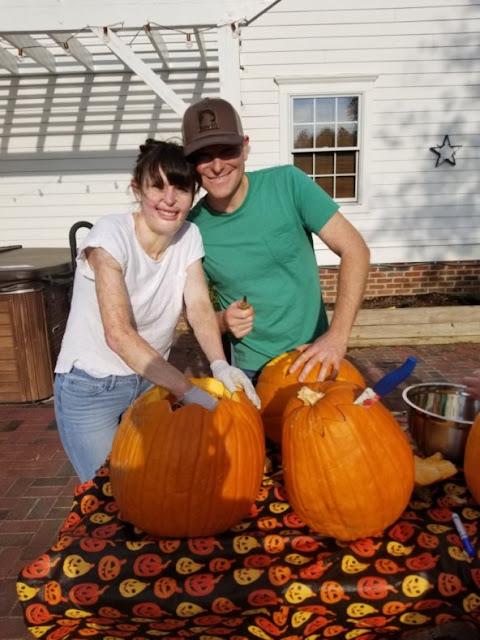