Merry Christmas, love the Mantis family (all 100 jagillion of them) 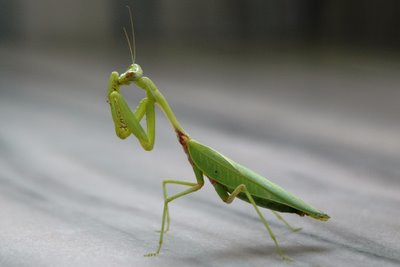 I was reading a book to Jane the other day when laughing caused
me to tilt my head back only to discover on my ceiling three little dots.
Since it was the morning obviously I didn’t have my glasses or my contacts
on so I couldn't see what they were.
I stopped the book and squinted toward the ceiling to get a better look.
They were too skinny to be flies and too long to be mosquitoes.
So I stood on top of my couch and saw they were baby praying mantises!
Then I made this big huge deal in front of Jane about these
creepy creatures because they are kinda rare.
I ran into the kitchen to grab a little jar and briskly caught all three.
Jane and I examined them in the glass jar then a very
curious Claire ran into the living room to see what all the commotion was about.
As we admired these three small bugs I happened to look near
the window where our newly cut Christmas tree from the
mountains of Virginia stood and noticed
another little praying mantis on the window.
"Oh look, girls!  Oh my goodness, here is another one!".
I walked to the window to catch him and that’s when it happened,
a little bad word slipped out of my mouth.


Behind the tree and on my window were thousands of baby
mantises squirming all over each other like maggots.
I felt a little breakfast oatmeal come zooming up my throat.
And just like a horror film, the little mantises' beady eyes
and long bodies made a mantis chain from our Christmas tree to the window.
My eyes followed this bug chain to the top of the
tree where they swarmed my vintage tree topper.
From the topper to the ceiling where now hundreds of mantises were
invading our air conditioning vent.
I looked down and felt the crunch of more mantis bodies under my feet.
I would be lying if I told you I was OK with this disaster, I was NOT OK.
I told the girls to go into my bedroom and shut the door and not come out
until I said so.  I considered calling the police, but called Christian instead
and in a panic told him the situation and begged him to come home.
He came home around lunch and we spent the rest of the day and well into the
night with our vacuum sucking the little babies up. 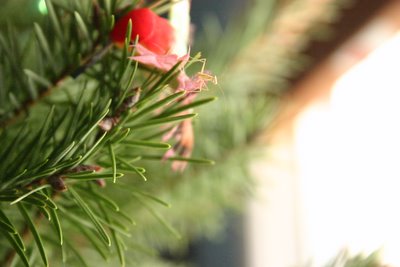 “Here’s one here honey!"
I'd yell to Christian who was a pro now with the vacuum attachment.
Then I swear I heard little mantises screaming at me:
“You scrooge, look what you are doing to me!!
This is supposed to be the most wonderful time of the year!"
Later in bed, that night after the mantises were sucked up and disposed of
Christian and I started talking about possible motives for this crime.
We figured an innocent praying mantis mama
laid her eggs in the tree before we cut her down on
that beautiful day in November.
And because of our cozy warm house, her eggs hatched
in the tree unleashing free 400-1200 little baby mantises,
(yeah, I did a little research online).
We seriously considered throwing the tree out altogether,
but the kids would die, and I did spend so much time decorating
her so cute and festive in case I get a surprise visit from Martha Stewart.
(She's from New Jersey you know).
But on Christmas day after the presents are unwrapped
we are throwing her out to the curb.
I don't care.
For now, I put a roll of toilet paper under the tree so if I happen
to spot a few stragglers I can take care of them with one pinch.
Merry Christmas ya filthy mantises!