And this blog will go on and on... 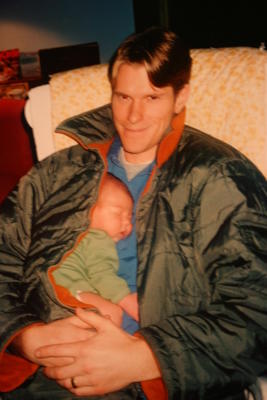 I know, I know, you think my blog is a shrine to
my husband and I guess in a way, it kind of is, and I don't care.
I would like to share my favorite things about my husband on this blog.
Yesterday, I watched confidently as Christian got out the scissors and
cut his own hair in the mirror. With talents like those,
what else could this boy from Arizona do?
Could he cut my hair?
So I challenged him, and he surprisingly obliged and cut my hair.
And the best part is, I like it.
What else can he do?  Well, I will tell you: 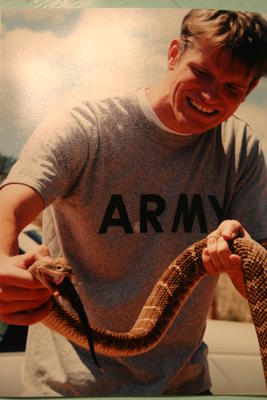 When I met Christian at my dad's office in Provo, he walked into the room
with baggy cargo pants and long hair.
As time went on and we got to know each other a little more, he showed me pictures
of his recent trip to the family ranch in New Mexico where I learned
he turns into Wyatt Earp for the week and catches
rattlesnakes with his bare hands.
His cowboy character is quite charming, and as I type this I'm reflecting
back to one late summer evening when we
were together at my family's cabin in Wallsburg, Utah.
We decided to ride horses together at dusk, and I
I watched in awe as he handled himself around the horses with ease,
like a regular Jim Craig from The Man From Snowy River.
Then he asked me to run and jump onto the horse holding his hand and
swinging myself onto the back of the saddle, like
Julia Ormond did in the movie, First Knight with the handsome
with “Lancelot” (Richard Gere).
So I did, and I trusted him, too.
Then off we rode into the sunset.
(This is all true!).

Since we bought our aged, musty dwelling here in New Jersey,
his hands have been hard at work preparing and doing all the
tasks necessary to fix it up and make it fit for human habitation.
Last week while working on the finishing touches (after a year)
in the girl's bedroom, he asked me to assist him while
he measured and cut a piece of molding for the wall.
I looked at him as he secured his safety goggles onto his brown eyes.
A wave of love swept over me as I watched him.
He had sweat trickling down his forehead and down his back
working in the summer humidity.
Then he used his nailgun to secure the piece to the wall.
“How does that look darling?”
He asked me. 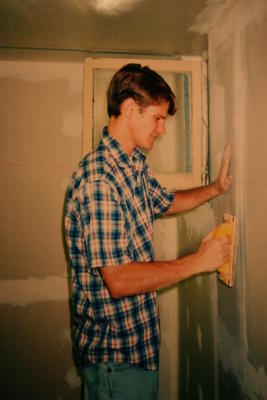 As I look around, practically every corner of 33 Harvey Circle
is something he has carefully constructed with his bare hands.
I have owned three homes with this man, and never once have we had to call
a “fix-it” guy to install, repair, or mount anything.
He can do everything in the house from the pluming to painting to tile and trim.
After college, Christian was offered the best job in this major.
It was no surprise to me of course because he loves what he does,
and he is good at it- really good at it.

In the fall when Christian and I were dating he would often
come to visit me and pull his skateboard out of the car and ride around.
I'd usually watch him show off
while sitting on top of my car wrapped up in a blanket.
I'd give him a few claps of encouragement then he'd say:
“Ok watch this one”.
Just like a little boy.
Just a few nights ago, I went to pick him up from the church where he was
spending time with the youth, and there he was in the parking lot with all
the young men surrounded him in a circle as he was
dazzling them all with his board tricks.
I felt like I was a young girl in high school taking home the “star” quarterback.
He jumped in the front seat and I smooched him.
We both glanced in the back seat as our children
looked at us with blank faces.
Someday you'll know how this feels. I thought. 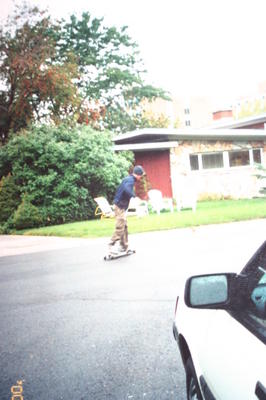 Last night as I was loading the dishwasher he walked into the
kitchen after putting Oliver to bed,
and loaded a few empty (and stinky)
bottles he had found under Ollie's crib.

Then he walked into the bathroom, washed and brushed the girls who were in the tub,
wrapped them both up in a towel and put on their pajamas.
After that, he told the girls a story (using his hands to add a grand effect),
sang them a song with his calming, charming, and masculine voice,
then kissed them gently and shut out the light.
Finally, he picked me up from the couch and took me to bed.
I had officially married the finest guy ever.

When Oliver was born at home I was a little nervous to not be
in the traditional hospital where food was delivered around the clock,
nurses attending to my every care,
and children NOT climbing over me.
I'd definitely get good rest for about 2-3 days.
But my husband took care of my concerns by making
homemade bread, whole-wheat waffles (grinding his own wheat too!),
providing me with fresh fruit and granola in the mornings,
and making sure I was sleeping every chance I could get. 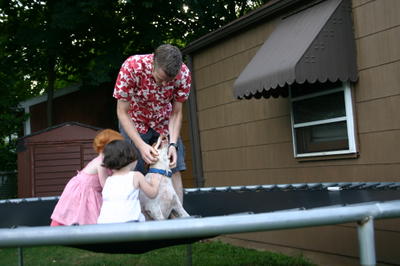 When I lay on our bed pushing out Oliver, he held my hand and looked into my eyes.
He shared soothing words of encouragement and love.
He also changes the oil in the car every 3,000 miles,
he creates furniture for me, (our kitchen table, my red armoire).
He redid the bathroom, makes frames for my pictures, pays our bills,
knows my clothes size, walks the dog, mows the lawn, paints my toenails,
and occasionally picks out my clothes.
While this post has to come to a close, I can confidently say;
(and in Celine Dion voice singing the song, My Heart Will Go On)
that his talents, ".....will go on and oooonnnnnnnnnnnnnn". 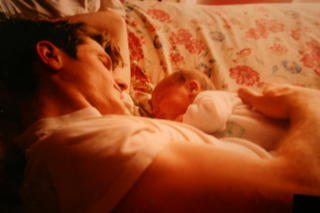